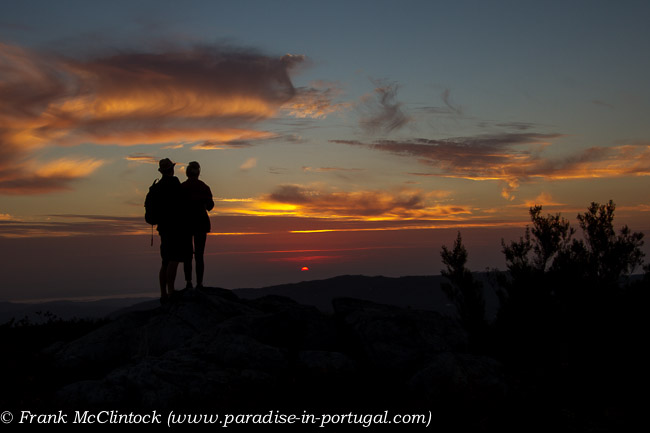 Couldn’t resist posting this shot, taken this morning from the top of Foia just south of the Quinta.

We were on a “Birding in Portugal” day, and it’s always best to start it off at sunrise, so there we were, dead on time, when up run two models and set the shot off perfectly!

It was a great day out too, with over 200 Booted Eagles seen along with Black Storks, Short-toed Eagles, loads of Red-billed Choughs and more Northern Wheatears than you could shake a stick at, but from a photographer’s point of view, this picture just took the biscuit. 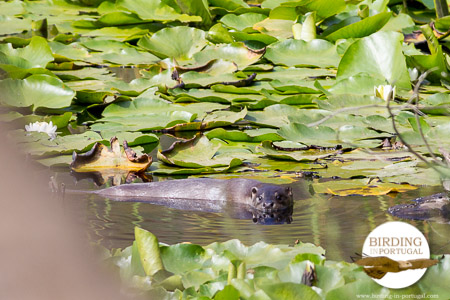 Considered to be the cleanest river in Europe, the Mira attracts Otters in abundance

For the last five years we’ve run a raffle at the Birdfair in the UK with a wicked prize of a week’s accommodation at the Quinta, and to date nobody’s ever claimed it and we’ve always given it away to the runner up, but this year is different as Liz Hughes has claimed and so we look forward to welcoming her to the Quinta soon.

The otter above was photographed today from our Water Rail and Kingfisher Hide down in Santa Clara on a Birding-in-Portugal stake-out and we hope it sticks around till Liz has a chance to see it for herself.

The picture above was taken a week or so ago from Birding in Portugal‘s Golden Oriole Hide in the Quinta’s garden as they got ready for the start of the Autumn Migration. They’ve left now, along with the Golden Orioles too, dead on time as ever. I find it extraordinary that they’re so punctual; over the last twenty years or so I’ve been keeping records of when our local Bee-eaters arrive and depart, and they’ve never been more than 36 hours out during all those years, arriving on the 1st April and leaving on the 31st August.

But enough gossip, let’s get down to some nitty-gritty … Great news from Salgados! This is the wetland in between ArmaÃ§Ã£o da Pera and Albufeira that we’ve been trying to save from being destroyed by over-rapacious development. I was asked to keep stumm about this over the last year as we didn’t want my soap-boxing to spook the judges while they ruled on the admissibility of the corrupted Environmental Impact Assessment carried out by the developers.

I say “corrupted” as the developers EIA somehow failed to note the largest colony in the world of a CITES’ red-listed species of plant! This is Linaria algarviana and it only exists in the Algarve … on the proposed development site this species has one of its last strongholds and this is made even more important by also being the largest. Rather surprising that they missed it, don’t you think?! Any way, we noticed its absence from the report even if they didn’t in their assessment and we raised a stink and challenged it, and for the past year or so it has been going through the courts, but now the judgement has been made and it has gone in our favour with a total ban on any development until an impartial assessment has been carried out over the course of the next year.

We’re not out of the woods by any means, but for the time being we should celebrate this small stepping-stone victory and thank those hard working souls behind the scenes who have gained us some breathing space, principally SPEA, A Rocha, Quercus, Almargem and their lawyers who have got us this far.

Next bit of good news is the Birdfair Raffle winners’ names, and the Kingfisher above is one of the birds you’re most likely to see when you claim your prize, as this was shot from our Water Rail and Kingfisher Hide down by the riverside a couple of days ago.

This is a Raffle Prize that we give away every year when we attend the British Birdwatching Fair in Rutland, UK. This Fair is the largest of its kind in the world and is always one of the highlights of our year, for as well as running the Raffle on our stand there, (whose prize you can read about below), we also give away a week’s accommodation as an item in their auction to help raise funds for species protection.

The Raffle itself has the same prize as that of the auction – the first prize is one week’s accommodation in a room for two here at the Quinta anytime between now and the end of October 2015 or from March 15th to July 15th 2016 – subject to availability of course! – and the winner this year is Liz Hughes.

Congratulations Liz, and thanks for contacting us; we look forward to welcoming you to the Quinta.

One of the runner-ups has contacted us and wins three mid-week nights accommodation at the same remarkable venue during the same time-frame and with the same conditions, so we look forward to welcoming him here too.

For those unlucky enough not to win this year, my commiserations … better luck next year.